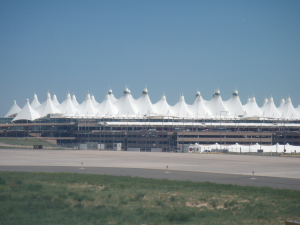 Denver is the capital city and the largest city in the state of Colorado. It has well over 700,000 and sits about a mile high above sea level. But here in the Mile High City might be something that can be as cold as the Rocky Mountains on a winter night. It might be the presence of a spirit that might be haunting a popular landmark in the city. But which places are worth visiting for the adventurous ghost enthusiast. This top ten list below unveils the names of all the places that are considered to be haunted and the stories of how these spirits seem to hang around for many years or even decades. With that said, here we go:

Imagine landing at the airport and disembarking off your flight (assuming you’re traveling from outside of Denver). And all of a sudden, you are in one of the haunted places of the city just like that. Denver International Airport is one of the busiest airports in the country. With so many people coming and going every year, it remains to be seen how many know what was here before the airport was even built in 1995.

It is said that the grounds were once a sacred burial ground for Native Americans. So it would make sense as to why it might be haunted. After all, if something is built on the grounds where human remains are buried below it might cause quite a few stirs. By stirs, we mean spiritual activity. This might have been the case when airport personnel would always deal with various technical malfunctions. Other than that, passengers have often felt presences and uneasy feelings when they set foot in the terminal. Could it be the altitude? Probably. But you can bet that no matter how high you are off the ground, a specter is bound to loom around the corner somewhere. 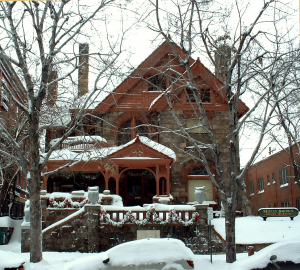 This was the home of a woman named Molly Brown and her husband J.J. Brown. Molly Brown was famously known as “Unsinkable” because of her heroic deeds of looking for survivors of the Titanic. Brown was a passenger and managed to escape the disaster in April of 1912. At the time, the Browns lived here. It had since been converted into a museum in honor of the Browns and their efforts.

However, employees of the museum have reported several instances of paranormal occurrences. J.J. Brown was known to be a heavy cigar smoker when he resided here. So it was no surprise when most people reported smelling cigar smoke at random places throughout the home. Also reported was the sound of the piano being played without anyone touching the keys. With every house that has paranormal activity, it would not be one without the sighting of shadowy figures moving throughout the halls and rooms of the house itself. 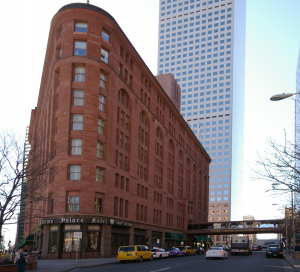 Though the “Unsinkable” Molly Brown stayed here the week after the Titanic disaster, her name bears no relation to the name of the hotel. The Brown Palace Hotel also played host to a wide variety of US Presidents, heads of state, and celebrities. Among the notable guests were the Beatles, Queen Marie of Romania, and six US presidents (the last being Bill Clinton).

This was also the sight of the murder of a gangster. Tony von Puhl was shot to death by a man named John Henwood. The murder was part of a competition between the two over a wealthy socialite by the name of Isabel Springer.

Aside from a sordid incident in the past, this hotel has received reports and recollections from past guests regarding some strange paranormal activities. There have been many spirits that have walked the halls (like one belonging to a train conductor). Other strange sounds have included a baby crying in the hotel basement, the unusual movement of the service elevator. The service elevator was said to be operated by the specter of a waiter.

This place was at one point the city’s orphanage. One night in 1888, a fire broke out on the building’s third floor. Many children were killed as a result. The Denver Orphan’s Home was renamed the Denver Children’s Home after the rebuild. At night, the sounds of the cries and whimpers of children can be heard. There have been stories of a specter that belonged to a young bride that is said to descend from the stairs at times. Some have said that the bride can also be seen somewhere in the hallway on the building’s second floor.

For a place that was the site for one of the grimmest tragedies in the city’s history, you can bet that this place would be haunted in some way or another. As for the story of the ghost bride, the connection is yet to be known. 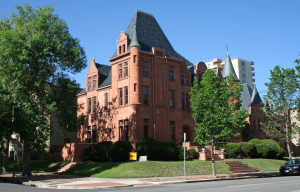 This is best known as the Patterson-Croke-Campbell mansion. It was owned by Thomas Croke when he initially built it for himself in 1890. After the place was completed, he set foot in it. It was said that he only stayed here once and never returned after that. Croke himself had said that he had some uneasy feeling about the place once he was inside. At that point, he sold it to Thomas Patterson.

Throughout the near 130 year history of this house, some strange occurrences have happened. One of the incidents was the death of two Doberman Pinscher dogs that plunged out of a third-story window. There was no explanation as to how it happened or why. The specters of Patterson and his wife are said to haunt the halls of this mansion. Also appearing was a child that could be seen playing in the hallway.

Cheesman Park is one of the most popular outdoor parks in the city. It’s a place where people can walk their dogs, have picnics, and have all kinds of fun. But what a lot of people don’t realize is that this park was built on an old burial ground. Like the airport, anything built on a burial ground is sure to awaken some spirits from their slumber. The cemetery was designed to be for the residents of Denver. However, the dead that were laid to rest were said to be “undesirable”. The dead were various outlaws, people who died from infectious disease, and the city’s poor citizens.

Before the construction of this park, nearly 2,000 people were already interred here on the land that is now Cheesman Park. To this day, the remains of the dead are still underground. Those who live near the park or visit it during the night time hours were said to hear some strange moaning and groaning noises among a host of other paranormal noises. Some have even sighted specters that appeared to have been lost, confused, and not sure what they were doing out and about. 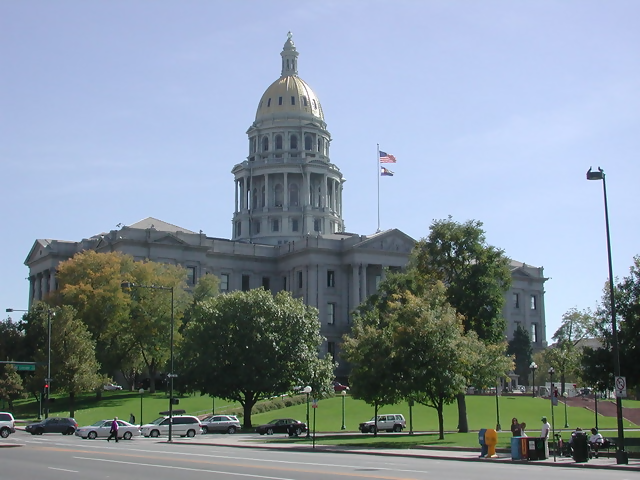 Don’t confuse this with the Capitol Hill in Washington D.C. (although that place might be haunted as well). This is a neighborhood where you’ll find the Colorado State House. This was an affluent neighborhood that was home to many of the city’s wealthiest people. While the city began to take shape, some of the mansions of ages past stayed on the ground while the other buildings began to be built around them.

The residents of ages past often let the new residents know that they’re still around. The spirits of many of the neighborhood’s past residents tend to lurk around in various buildings within the area. The most notable location was inside the Colorado State House itself. Most of the sprits and shadowy figure sightings have also been recounted as seen on the streets and the side of many buildings including the Governor’s Mansion (which happens to be close by to the State House itself). 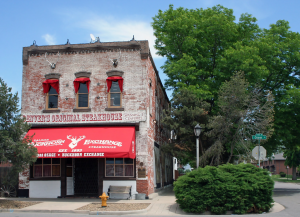 Haunted places to fly into. Haunted places to stay at. Haunted places to eat at? The Buckhorn Exchange as the sign above says is Denver’s Original Steakhouse. It opened its doors way back in 1893. Other than the place being an eatery for many of the city’s patrons, it also did business as a trading post as well. Your usual people in the Wild West would often find themselves spending time here. Miners, cowboys, railroad workers, and even then-President Teddy Roosevelt. The 26th President of the United States once made an appearance here during his term in office in 1905.

With a place that is full of mounted animals on the wall, it could give someone the creeps. Yet, it’s the paranormal activity that seems to outdo it all. Patrons and employees have told stories of mysterious movements of tables, noises of silverware clanging, footsteps and voices were heard frequently. 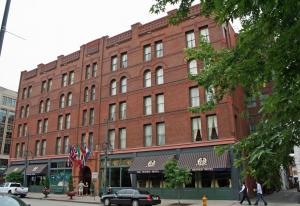 The Oxford Hotel is one of the oldest hotels in the city. It was built and founded in 1891 by Frank Edbrooke. It underwent renovations in the 1930s despite the rest of the country feeling the grip of the Great Depression. And much of the nation’s heartland was in the grip of a series of dust storms that have destroyed crops and damaged property. Yet the project moved forward without any issue and adorned an Art Deco style by the time renovations were finished. The hotel still serves travelers the world over to this day.

Some of the visitors would often recount of some spiritual activity happening in either the halls or their rooms. One such visitor reported seeing a woman standing in a room. Some have seen faint visions of a woman’s face off in the distance or mirror reflections. Legend has it that the woman that haunts these halls was said to have been murdered by her husband here at this hotel.

Another ghostly presence might even be felt inside the hotel’s bar. One night around Christmas, a postman appeared at a bar and ordered a beer from a bartender. It was said that he sat there and drank a beer. By the time he was finished, the bartender was ready to take the empty beer bottle only to find it disappearing along with the postal worker himself. 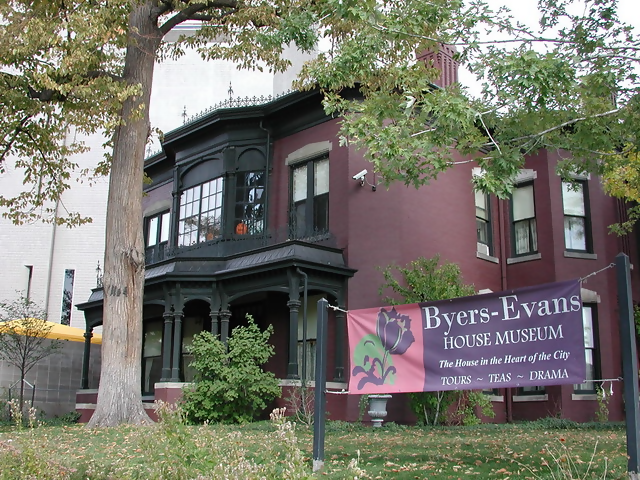 The Byers-Evans House was once home to two of the most prominent families in Denver, the Byers and Evans families. It was originally owned by William Byers, a newspaper founder. Byers later then sold the residence to Williams Gray Evans, once a territorial governor before Colorado entered the Union. The home has long since been restored as a museum.

Given the number of exhibits inside, there is something else that might be worth checking out. The sound of doors opening and closing with no one behind them is a common occurrence. Other paranormal happenings have included but are not limited to phantom voices and apparitions showing up at random in some of the rooms and the main hallway.