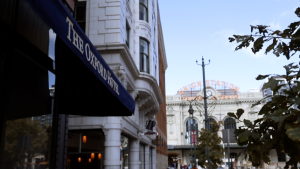 Denver, Colorado had a stellar place in the American West, back in the day. It was the place that miners tracked through on their way to riches. And it was a place for society’s finest to see and be seen. As this frontier was built up, many beautiful buildings and hotels found themselves in the middle of the social scene. The Oxford Hotel was one of those buildings.

During the 1870’s, the arrival of major railroads to the small mining supply town of Denver began to happen. With this change, came an influx of people that slowly began to transform a small town into a regional metropolis of the High Plains and the Rocky Mountains.

After the major population boom that started in the 1870s, Denver quickly became the third largest city in West and 25th largest in the United States. By 1890, the population of Denver had reached 106,713 and the city quickly became the hub of a steel spider web; a network of more than 100 different Colorado railroads that tapped into a rich mountain and plain hinterland.

During this period of great transition in Denver, The Oxford Hotel was completed. The idea for the hotel was conceived by Colorado’s leading architect, Frank E. Edbrooke. The Oxford stood five stories high and preceded Edbrooke’s completion of The Brown Palace by one year. The Oxford Hotel came to fruition after local building and brewing tycoons Adolph Zang, Philip Feldhauser, and William Mygatt, saw the need to create a first class hotel near Union Station.

The bar was opened as part of the Oxford Hotel in 1891. It was well known for its martinis, even though it was not originally named the Cruise Room.

During the Prohibition era, The Cruise Room was operated as an illicit speakeasy. Employees were able to use secret paneling and tunnels.

After Prohibition, The Cruise Room was officially opened, along with its full interior and full bar. In fact, it was opened the day after Prohibition ended.  As an extension of the hotel and the restaurant, this bar has operated continually since its official opening.

The Cruise Room, however, has remained an independent establishment, and it is managed in a partnership between the operator of the restaurant and the Oxford Hotel.

In 2012, the Cruise Room was fully restored, including historically accurate paint in light-pumpkin color. The marble floor was also replaced. This restoration was initiated by owner/developer Dana Crawford, who became a partner in the Oxford Hotel in 1980.

The drinks menu was also updated. There was a heavy emphasis on mixology, and the drink menu includes drinks like “Pineapple Julep”, “Whiskey Clover Smash”, and “Pomegranate Sling”. The bar also offers patrons a choice of more than a dozen martinis, which are  served from oversized martini shakers.

The turn of the century was very successful for The Oxford Hotel. During the 1920’s, the hotel manager, Calvin Morse, reported that the hotel was able to host 35,000 guests a year. He said that they often had to turn many people away. It was during this prosperous time that the owners decided to construct a $75,000, two-story addition behind the property on Wazee Street. This 1902 addition matched the terracotta and pink sandstone trim of the original façade.

1906 saw a change in The Oxford Hotel management team with Charles B. Hamilton and James L. Brooks named as the new managers. Hamilton and Brooks took on a $20,000 remodel of The Oxford. They added on a mezzanine with a monogrammed, “OH”, on the iron banister. They were also responsible for the added marble wainscoting, a café, and an exterior entrance to the basement barbershop.

Over the next 20 years, the United States as a whole underwent many changes in style and taste. The Oxford Hotel entered the 1930s ready for yet another remodel. Denver architect Charles Jaka took on the project, and was responsible for transforming The Oxford into an Art Deco showcase, reflective of the time. In the new Cruise Room cocktail lounge, which featured hand carved panels by artist Alley Henson, Denver society could enjoy the repeal of the Prohibition Amendment.

During World War II, the influx of troops arriving at Union Station filled The Oxford Hotel to maximum capacity. Every available space was used; including the attic and the broom closets. Mothers of Denver servicemen would set up shop to serve hot coffee, doughnuts, and turkey sandwiches to the troops 24 hours a day. 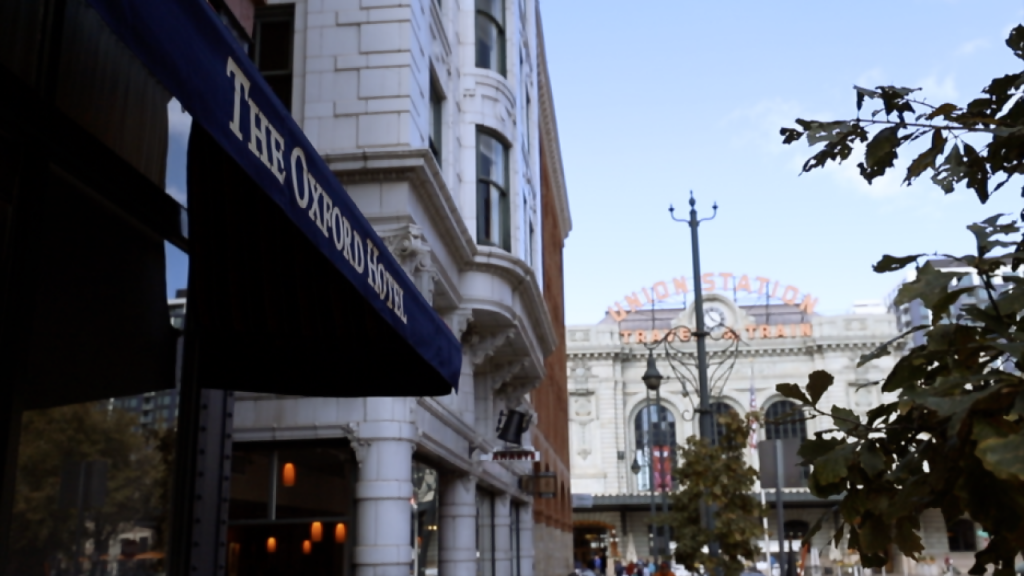 The Oxford Hotel After WWII

After the end of World War II, Denver began to experience its second major boom. The city was emerging as a national center for tourism, federal offices, and energy firms. The town began to take notice and started an effort to rebuild its downtown, demolishing many of its landmarks and virtually all of its nineteenth-century hotels. The Oxford Hotel was fortunate enough to have survived this period of transition as a bastion of respectability in a declining lower downtown.

The Decline Of Train Travel

The 1960’s and ‘70’s allowed The Oxford Hotel to become a center for jazz, folk music, and theatre. Hundreds of people would pack into the hotel at night to see The Oxford Players’ rendition of “Ten Nights in a Barroom” as well as the Queen City Jazz Band.

Unfortunately, as train travel began to rapidly decline, Union Station was left obsolete. It became nothing more than a reminder of years gone by. This void lead to a rapid decline in the downtown Denver area. However, the success of the reimagined Larimer Square was able to open up the city’s eyes to the possibilities of the grand architecture of Colorado’s silver age.

How Is The Oxford Hotel Haunted?

This majestic hotel has seen its fair share of drama over the years. There are, however, two noteworthy spirits that are said to haunt the Oxford Hotel to this very day. The hotel is also known for its tales of locked bathroom stalls to sinks that turn on and off during the night. But the real mystery lies behind the door of Room 320.

In 1898, a woman named Florence Montague shot and killed her lover before taking her own life in that room. Ever since that fateful night, single male guests who stay in Room 320 have reported sheets being ripped off of the bed and their arms being pulled by an unseen force.

The hotel’s Cruise Room bar is famous for its martinis, Art Deco style and a mysterious postal worker. Bartenders often report seeing a man walking into the bar wearing an old post office uniform. He always orders a beer before muttering “the children, I have to get the gifts to the children.” He drinks the beer and turns to leave. But, when the bartender picks up his bottle, it’s always full. Research has uncovered the story of a postal worker from the 1930s who was on his way to deliver Christmas presents to nearby Central City, but the gifts were never delivered. Later that spring, his decomposed body was found on the way to Central City with all of the Christmas gifts still with him. That single beer at the Cruise Room may have been his last.

Today Denver is a vibrant city with many things to see and do. If you travel out there, you can be sure to enjoy museums and restaurants, as well as arts and entertainment.

There are also many historic sites to see and learn from. While you are out visiting, perhaps you will stay at the Oxford Hotel. Be sure to enjoy a drink with the postman, and if you are a single man make sure you watch out for Room 320!

Have a look at these other spooky ghost tours around the U.S.