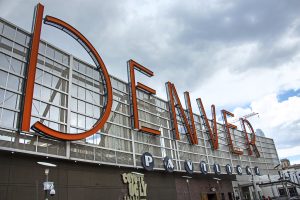 Take a sleepy, picturesque Denver suburb, add a few boarded-up windows, a rusting wire fence, some aging red bricks, and an extremely sinister past, and you’ve got the recipe to make the most haunted house in Colorado, The Peabody-Whitehead Mansion. This former mansion was to be the home of a well-known surgeon, William Riddick Whitehead. After his passing in 1902, Governor James Peabody took up residence in the mansion, and in the 1960s and 1970s, the home played host to an assortment of bars and restaurants. As for builder Dr. William Whitehead, he is best known for his work treating patients during the Crimean War. He was also one of the founders of the Denver College of Medicine in 1881, the President of the Denver Medical Association in 1877, and even the President of the Colorado State Medical Society in 1883. With such an extensive medical background and the heaps of cash that come with his profession, it’s no wonder that Dr. Whitehead built such a large and imposing building as his home. Only using the best materials, Dr. Whitehead and his builders finished his home in 1889 and moved in shortly after that.

Denver’s Most Haunted Mansion, Home To More Than A Few Spirits

Soon after Dr. Whitehead and his family moved into the home, strange things began to occur. It seems odd that a brand new house would carry such hauntings in it, but apparently, it wasn’t the brick-and-mortar structure that was haunted but William Whitehead himself. He had just moved to Denver from New York, where he was a wartime surgeon during the deadly Crimean War. Due to the war’s severity and the primitive medical knowledge of the time, Dr. Whitehead lost many of his patients. It is said that the spirits of the soldiers that died under Dr. Whitehead’s care followed him to his new home, all the way in Colorado. During the Whitehead family’s stay at the home, poltergeist activity was the most common. Reports came out of the house of flying books, falling pictures, and extreme disturbances throughout the night. Dr. Whitehead was reportedly tormented by the spirits of the soldiers he said he ‘failed’ and said that he could see their ghosts’ everywhere he looked.’

The stress of existing in the home became too much for William, and in 1902 he passed away inside the mansion. The paranormal activity within the Peabody-Whitehead Mansion did seem to calm a bit following the death of Dr. Whitehead. Could this prove that the spirits here were actually only attached to William himself? The home lay dormant for some time, and the ghosts of the Peabody-Whitehead Mansion lay restful… for now. Strangely enough, however, the activity did pick back up when the home was purchased and converted for use as a bar and restaurant. Perhaps the presence of new life and strangers coming in and out stirred up the energies at rest?

The mansion’s second owner, Governor Peabody, made loads of enemies in Colorado by breaking up labor unions with brute force. His extreme energy is said to linger on inside of the mansion, as he was always known to get what he wanted in life, so it’s no surprise that he’s going to stay stubborn and stay where he wants in death as well.

Hauntings at The Peabody-Whitehead Mansion

During the busy parts of the mansion’s life, poltergeist activity was yet again on the forefront of the hauntings here. Strange issues with electrical equipment were common, and visitors even began to report the sounds of disembodied infant cries throughout the mansion and on the surrounding property. Witnesses also report books flying off the shelves, objects moving on their own, and disturbances (sound familiar?)

Employees reported glasses crashing to the ground, being thrown against walls, even breaking as they sat still on the bar top and a chandelier that is disconnected from all electricity flickers without any (known) power source. The spirits in the home are also very progressive in their thinking, as one report came out that a spirit poured a bottle of beer down the back of a cook’s shirt after he bad-mouthed the LGBT community. Investigators report that there are the least twelve spirits in the Peabody-Whitehead Mansion. Dr. Whitehead’s spirit is said to roam the halls here, a ghost named Eloise or Ella haunts the second floor, and the basement is said to be haunted by the spirit of a waitress who reportedly committed suicide there. A woman who died in the building while waiting for her fiancé has also been reported as a strange apparition peeking out of the mansion’s windows. On the first floor in the women’s restroom, an older man is said to haunt the area and smoke a strong cherry-scented pipe.

The home was even featured on Travel Channel’s Ghost Adventures, and Zak Bagans and his paranormal investigation team visited the mansion. (Zak Bagans is no stranger to the paranormal, you can read all about his haunted artifact-filled museum here!

According to one tour group that went to the Peabody-Whitehead mansion, they started around the back of the mansion when the tour guides told them to walk down the alley next to the home and close their eyes to see what they sensed. Many of the tourist’s fingers started to tingle, and they were filled with dread as they got closer and closer to the mansion, and soon a sinister story was brought to light.

In the 1970s, a remodel was occurring on the Peabody-Whitehead Mansion, and a couple of unruly construction workers abducted a young girl who was walking in the area. They brought her into the vacant home and raped her, murdering her afterward. They are said to have buried her body in the basement of the house under the foundation.

During the Ghost Adventures investigation, the crew set their sights on the basement and went down to investigate, hoping to come back with some solid evidence of the hauntings at the mansion. When they asked what happened to a girl down there, they received a response from a disembodied voice that said ‘she was raped.’ Spot on to the crime that was committed here. Is this proof of the paranormal in the home? You’ll have to decide that for yourself. The mansion’s sinister past has created such negative energy that most locals tend to stay away from the home and the property, worried that a spirit will attach to them and follow them home.

If you want to know more, the mansion lies vacant these days, an empty, abandoned shell of its former self. The mansion can be viewed only from the street through a protective wire fence, but the building remains unoccupied, and the entrance is highly restricted. The future of the building itself is uncertain, but it is supposedly a protected landmark. Perhaps in the future, some other wealthy physician will see the beauty in the chaos and awaken the spirits of the Peabody-Whitehead mansion once again.