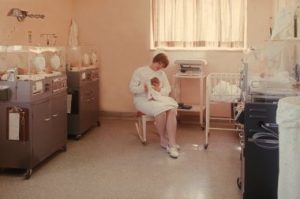 The beginning of the Denver Children’s Hospital can be traced all the way back to Dr. Minnehaha Cecelia Francesca Tucker Love, or Dr. Minnie C.T. Love for short. Dr. Love was born in La Crosse, Wisconsin, in 1856 and obtained her doctorate through Howard University. In 1897 through the support of the Denver Women’s Club, Dr. Love was able to start a ‘tent hospital’ called the Babies Summer Hospital in City Park that would help the children of the indigent and more impoverished communities. The majority of the hospital’s supplies came from donations and private organizations. The hospital’s water and power services were even donated. The phrase at the makeshift hospital was ‘Come on in, and close the tent flap behind you…’

The Babies Summer Hospital served the children for over two years before the funding and staff were no longer available due to the Spanish American War that was using a large part of the supply of durable medical goods and medical personnel. Recognizing a need for a sustainable hospital for Denver’s children, she stated in the Denver Medical Times (1906) that ‘As soon as sufficient money and furnishings are pledged, a suitable house will be procured and fitted out with all the modern appliances for the successful treatment of the acute and chronic illnesses of children. In a hospital devoted exclusively to children, the little patients free from subjection to sights and sounds no best for them to see and hear, but which are unavoidable among the adult sick.’

She started the campaign to get the hospital started, and the first two contributions totaled $6,000. On May 2nd, 1907, The Board of Directors incorporated under the name ‘The Children’s Hospital.’ Following this huge step, the purchase of nine lots of land at Albion and 16th Avenue was made. The price of this purchase was $1,200. On August 11th, 1909, the Board purchased a building that was once known as the Denver Maternity and Women’s hospital for $15,729. This became the main building of the hospital and the training facility for the staff of The Children’s Hospital. It had the capacity to house about thirty children within its walls.

When the hospital was opened on February 17th, 1910, it offered free beds to those who could not afford medical care. One of the first recipients of the free rooms was a little girl named Constantia, who suffered from Polio. The girl became the subject of fascination and focus because of the remarkable recovery she made at The Children’s Hospital. When she arrived, she was bedridden, and within four months, she was seen in a brace and walking independently.

Throughout the years, the hospital had received additions, renovations, and new wings added to it. The growth of The Children’s Hospital carried on until September of 2007, when the hospital management decided to move to a newer and larger facility. On September 29th, 2007, the patients and staff of the hospital said their goodbyes. They wrote messages all over the walls for whoever bought the building to see. The messages share stories of joy as well as loss, not uncommon in a hospital. Some of the stories tell of the struggles of patients of the past and the loss that was a more common occurrence when medicine wasn’t as evolved. One of the writings states that ‘the more sorrow you can carve into your being, the more joy you can contain.’

The reports and stories of the paranormal at The Children’s Hospital go back to the beginning in 1897. Reports of ghostly nurses and children are made at nearly every corner of the buildings, with stories being passed down from staff members and patients. The most famous of these ghouls is that of a nurse that lived in Tammen Hall (a wing of the hospital donated and built by Harry Tammen) The story goes that she was pushed down the elevator shaft by her fiancé and left to die at the bottom. Another story says that construction workers had killed her and buried her at the bottom of the shaft. The story includes the fact that she was soon-to-be-married, and visitors report seeing a woman in a wedding dress wandering the halls. One medical researcher at the hospital reported seeing a ‘strange woman’ at the end of the hallway on the hospital’s third floor. She claimed that just as she noticed the woman, she vanished.

Another staff member who was stringing wires through the ceiling reported that when he was alone in the building, he witnessed lights turning on and off as well as doors that would open and close all by themselves. He was convinced that the spirit was that of a nursing student that had died in the building. He refused to work alone after this occurrence.

The reports don’t end there, as many other happenings have been told over the years. A security guard was doing rounds in the hospital one night when he got off the elevator to a foggy entity staring at him. He became drenched in a cold sweat, and the apparition passed through a wall. He called his boss and quit shortly after that.

A rumor has also surfaced of a nurse who had committed suicide in the 1950s in Tammen Hall just after its grand opening. This nurse’s name was Anita, and they even named a room after her, adding credibility to the story. Reports of cold spots, elevators that move on their own, and a spirit named Shane were also quite common within The Children’s Hospital. Shane resides on the fifth floor and was said goodbye to in some of the writings left behind by staff members. Shane is said to have bothered children that stayed on that floor, patients waking up in the middle of the night screaming for nurses to ‘get him off of me!’

Shadow figures on all of the floors are common, and disembodied voices are reported throughout the hospital and the surrounding grounds.

One paranormal investigation team that came to the old hospital building turned up with loads of evidence, concluding that The Children’s Hospital is filled with spirits. During the night, strange sounds began to come from room 562, which sounded like rhythmic thumping and footsteps. The sound of debris crunching in the hallways was also reported (as the hospital floors were covered with leaves, dirt, plastic, and other trash at the time.) Once one of the investigators went upstairs to see what was causing the noise, the noise left room 562 and moved over to room 563 and its adjoining bathroom. This same investigator also reported the feeling of being followed and watched as he made his way through the halls of the old hospital.

The hospital was home to many young souls throughout the years, which is evident in the writings left by those who survived their stay. Some of the writing records the stories of the lengths of time that the staff had worked at different locations and the length of time that some patients had stayed there. One of the theories that float about the paranormal community is that a place becomes ‘haunted’ due to people’s emotional experiences in that location. The range of emotions felt at The Children’s Hospital from its start to its finish are palpable, and the hospital itself holds these energies tightly.