Originally started with the best of intentions, the Denver Children’s Home was known as the Denver Orphans Home. In almost every city across the ages, people have tried to help the orphans of the community. Sometimes these efforts were truly helpful; other times there were devious intentions at play. Let’s take a look and see if we figure out why it might be haunted.

History Of The Denver Children’s Home

Originally called the Denver Orphans Home, the home was started in 1881to help alleviate the critical problem of supporting dependent children. The home was able to offer short term shelter to the children of the families who had limited means and were in a crisis. They were also able to care for orphans and other children who were desperately in need of long term shuffle. In 1902 the organization moved to a new building at the corner of Albion Street and Colfax Avenue. This new building was designed by Denver architects Willis A. Marean and Albert J. Norton. Known today as the Denver Children’s Home, the facility is able to provide residential therapy, counseling, and other social services for children who are experiencing emotional or psychiatric problems, or who have been abused or neglected.

The push behind the establishment of the Denver Orphans Home came from an $850 donation to aid destitute children. This donation was given to the Ladies’ Relief Society in 1880 by several men, including philanthropist George Washington Clayton and Denver Jewish businessman Fred Salomon. In addition, J. H. Wyman donated a half-block of land on Race Street for the orphanage. Later on, when the first cottage to house children was constructed, it was named after him. According to the Articles of Incorporation which were filed in January 1881, only white orphans who had no parents living under the age of twelve were to be admitted to the Denver orphans Home. But the home soon changed its charter to admit destitute half-orphans who had one parent living, “thus enlarging its sphere of usefulness.”

As was typical with most child welfare institutions of the time, the Denver Orphans Home was founded by members of the city’s elite, largely for the benefit of working-class children. Margaret Gray Evans, the wife of Colorado Territorial Governor John Evans, served as the first president of the board. Among the first subscribers in the $1,000 donation category were such Denver luminaries as David Moffat, Walter Cheesman, Elizabeth Iliff, and Margaret and John Evans.

During the 1880s and 1890s, the elite women on the Denver Orphans Home board took a deep interest in the day-to-day affairs at the home. These women were however, motivated by genuine compassion, religious benevolence, and the desire to perpetuate a middle-class Protestant social order. They hoped to achieve this by “uplifting” and directing the lives of the working class, and sometimes immigrant children, in a quest for social justice. Most of the board members would probably have agreed with Mrs. Belden, an early Home president who believed that “there cannot be a nobler charity, a diviner work, than the care of destitute children.” Involvement in the orphanage was also probably a way for these women to raise their own social standing in the local community.

The Denver Orphans Home began accepting children at the home of Mrs. Lord, who agreed to board them for a fee at her residence on Ninth and Pine in 1882.  But the new home was soon moved to other temporary quarters at Seventh and California. The success of the early fundraising campaign for the home, resulted in the first Denver Orphans Home building, which was constructed at Sixteenth Avenue and Race Street in 1886. The number of children under the care of the Denver Orphans Home increased steadily, reaching 83 children in 1898 and 125 children in 1900.

When the building at Sixteenth Avenue and Race Street proved insufficient to help the growing number of children, a larger, permanent home was built at 1501 Albion Street in 1902—a structure that still stands to this day. This home was designed by the Denver architectural firm of Willis A. Marean and Albert J. Norton and the two&½ story red brick building cost nearly $35,000. The massive Second Renaissance Revival structure provided much more space for children and it had plenty of large windows to let in natural light.

From the start, the Denver Orphans Home was more than a shelter. Although the orphanage was formally non-sectarian, it was Protestant in all but name. Religious instruction was taught according to Protestant dictates and usually by Protestant ministers or teachers.

From the beginning, many children stayed at the home for only a short time, but after the Colorado State Home for Dependent Children opened in 1896, the managers of the home concentrated on assisting children in need of short-term aid so as not to duplicate efforts. The loss or illness of just one parent could have a profound and devastating effect on a working class family in an era before social welfare pensions. Because they were generally forced to accept unskilled, lower-paying jobs, widows may have faced a greater challenge than men in supporting their children. Widowers, however, were not immune to the problem of combining a job with child care. Working-class men were generally unable to pay a housekeeper to care for young children and turned to the home as a stop gap measure. 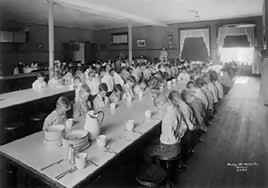 The children at the home were exposed to a certain degree of regimentation and imposed conformity. In the home’s report for 1890–91, a list of Domestic Rules gives some insight into everyday life. Upon admission, each child was to be bathed and disinfected and all clothes changed. No child was allowed to come to meals until “hands, face, and hair was in proper order.” Each child older than four was taught the proper care of clothing, and children were to be polite and kind to each other and the employees.

The Denver Orphans Home board members, led by the education committee, took great pride in the children’s school progress. In the early years, classes were taught on the grounds with private teachers. As the years passed, however, the children were generally integrated into the Denver public school system.

How Is the Denver Children’s Home Haunted?

It may seem impossible that a place that tries to do such good could be haunted. But it is. When the home was first opened, a fire broke out on the 3rd floor. Sadly, many children died in that fire.

People report hearing the cries and whimpers of children on a fairly regular basis. There have also been many reports of the sounds of children playing and laughing.

Another sighting is of a woman. She is dressed as a bride and has been seen floating down the stairs. People have also seen her floating across the 50 foot wide second floor hallway.

Denver was a bustling city back in time. It was full of different social classes of people too. As is the usual way, there were a handful of society women who wanted to help orphan children in the city. They had every good intention.

Once the Denver Orphans Home was established, the board members decided to help educate the children. The orphans were given religious and academic lessons.

Sadly, a fire on the third floor took the lives of several orphans. These poor souls are thought to still roam the house today. You can hear the cries and whimpers. You might also see the ghost bride who is known to float up and down the stairs.

Denver is a great city with many things to see and do. If you are in Denver, make sure that you stop by the Denver Children’s Home and keep an ear out for crying kids.

Have a look at these other spooky ghost tours around the U.S.