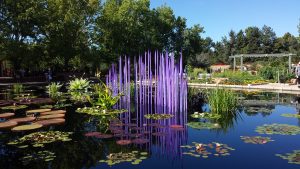 Located along the South Platte River banks, just next to the foothills of the Rocky Mountains, Denver was founded back in November 1858 with the plans to be a booming gold mining town. Unfortunately for prospectors and investors, the gold quickly ran out, and the city evolved to become a supply hub for newer mines deep within the Rocky Mountains. Denver proliferated, eventually becoming the state capital of Colorado. Investors in the city built a rail line from Cheyenne to western Kansas, which traveled through the Mile High City, bringing new people and supplies. New roads and improvements to the railway and air travel in the early twentieth century made Denver a hub for transportation as well. Denver went from a small urban core surrounded by farmlands to a booming cityscape with quickly growing suburbs surrounding it. All of these residents needed things to do to occupy their free time, and the quickly expanding concrete of the city created the need for a botanic retreat… Queue the Denver Botanic Gardens.

The Botanic Gardens Are Born

The Colorado Forestry and Horticulture Association saw a need for an outdoor escape in the busy city and founded the Denver Botanic Gardens in 1951. Architect Saco Rienk DeBoer, an assistant designer of the Red Rocks Amphitheatre and Washington Park, was hired as part of a fifteen-year plan to create this lush refuge. Initially, the gardens were located on a 100-acre plot of land in City Park, but later it was moved in 1959 to its current location near Cheesman Park.

Today, Denver Botanic Gardens is a city highlight and one of the most frequented parks in North America. It boasts forty-three unique exhibits and welcomed over 1.3 million visitors through its doors in 2017 alone. Its mission statement is to ‘inspire the public to be good stewards of the environment and to connect people to our past, present, and future relationships with plants of the Rocky Mountain region.’ The gardens accomplishes this statement by continually showcasing plant species native to Colorado. Since 1969, El Pomar Foundation has supported the gardens through generous grants towards construction and science education programs.

It sounds absolutely idyllic, right? A little slice of heaven right in the heart of Denver. Unfortunately, the grounds and the past rear their ugly heads at the gardens in the form of ghostly apparitions and daily paranormal occurrences.

Ghosts In The Gardens

It’s no secret that the Denver Botanic Gardens sit atop land that once served as a large cemetery. Mount Prospect Cemetery opened its gates on the 160-acre site in 1858. Forty acres of the cemetery became Mount Calvary, a burial place exclusively for Catholics. In 1872, Congress decided that the site of Mount Prospect was technically federal land, so it was sold to the City of Denver with the agreement that it always serve as a cemetery (we see how well that plan worked.) In 1873, the cemetery became known as Denver City Cemetery.

By the 1880s, the City of Denver was begging and pleading with Congress to change the status of the land from cemetery to park land. On January 25th, 1890, Congress agreed to their pleas, and the cemetery became Congress Park. Soon after, the task of moving over 5,000 graves and their residents began. The project was managed by undertaker E.P. McGovern and was mishandled tremendously. The allegations of abuse of the corpses included dismembering bodies so that they could fit into child-sized coffins, which were cheaper. McGovern was never brought to justice for his crimes and was dismissed before all of the graves could be relocated.

Denver’s mayor at the time, Robert W. Speer, was looking to add beauty to Congress Park; he believed that the city needed his ‘City Beautiful’ movement of the early 1900s. He claimed the city did not have the funds to create a gorgeous park and encouraged benefactors to donate. He had no luck until the widow and children of Walter Scott Cheesman came forward with a whopping $100,000 donation for a park pavilion. This explains why the park that the gardens are on is known as Cheesman Park. (For more on Cheesman Park, check out our article here!)

In 1950, the City of Denver successfully persuaded the Catholic Archdiocese of Denver to grant the deed of Mount Calvary (the Catholic cemetery) back to the city government. While the botanic garden was originally planned for construction in City Park, it was relocated to the Mount Calvary site.

The first person buried in the cemetery was a man named Abraham Kay. He died after suddenly being stricken with a severe lung infection. He was buried on March 20th, 1859. Some say the first person buried was actually a man hanged for murder, but there aren’t many reports to figure out which version is accurate. The second man buried was a Hungarian immigrant named John Stoefel. He arrived in Denver to settle a dispute with his brother-in-law and ended up shooting him on April 7th, 1859. Both of the men were gold prospectors, and witnesses state that Stoefel was truly there because he wanted to steal his brother-in-law’s gold. With the nearest official court in Kansas, a less-formal ‘people’s court’ was assembled, and Stoefel was quickly convicted of murder by a court of his peers. On April 9th, 1859, he was hanged from a cottonwood tree at the intersection of 10th and Cherry Creek Streets. About 1,000 people came to spectate the hanging, and his body, alongside his brother-in-law’s, were dumped into the same grave at the edge of the cemetery.

Not a great start, if you ask us. As the edges of the graveyard began to fill with outlaws, Denver residents began to call the cemetery the ‘Old Boneyard.’ Mt. Prospect gained another nickname when professional gambler Jack O’Neill was gunned down outside of a saloon in March of 1860. After an argument ensued with a man where O’Neill said the other man was lying about his heritage. A couple of days later, O’Neill was gunned down by this man as he passed by the door of the same saloon. When the news spread, the cemetery became known as ‘Jack O’Neill’s Ranch.’

The cemetery was eventually home to a smallpox hospital, established just south of the Jewish cemetery where many of its patients died and were buried right on the grounds.

The Work of Ghouls

When the news of E.P. McGovern got to the Denver Republican newspaper, its headline proclaimed that his work was ‘The Work of Ghouls!’ The article described in detail McGovern’s practice of dismembering corpses to fit into smaller caskets. The scene was described in the article as such ‘The line of desecrated graves at the southern boundary of the cemetery sickened and horrified everybody by the appearance they presented. Around their edges were piled broken coffins, rent and tattered shrouds and fragments of clothing that had been torn from the dead bodies…All were trampled into the ground by the footsteps of the gravediggers like rejected junk.’

All of this desecration and disrespect had to have created a wave in the paranormal world. Almost immediately when the bodies began to be removed all the way back in 1893, strange occurrences started to happen. One of the first reports of paranormal activity on the grounds came from a gravedigger named Jim Astor. He stated that he felt ghostly hands land upon his shoulders as he tried to dig out valuables from the hard ground. Astor immediately ran from the graveyard and wasn’t seen again in the area. Residents who lived in homes nearby began to report sad and confused apparitions at their doors, knocking into the night. They also heard sounds of moans from open graves.

Even today, these spirits still roam around the grounds of the Denver Botanic Gardens. Visitors tell of unexplainable bouts of sadness or dread in a particular place, and others hear hundreds of whispering voices and moans that come from the fields where the graves once lay. Children have been seen playing in the park during the middle of the night before they vanish, and a woman is heard singing to herself before she too suddenly disappears from curious eyes. Strange shadows and misty figures are also seen regularly.

Have you ever visited Denver’s beautiful Botanic Garden? How about at night? It seems like the deeper the research goes, the more stories you will find about the botanic gardens and the specific spirits that still reside there, by choice or not.