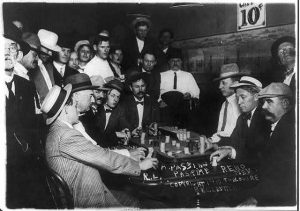 Deep into the little old town of Cripple Creek, Colorado, lies an old building at 300 E. Bennett Avenue. The structure itself holds its own personality and antique charm. The Colorado Grande Casino and Hotel seems harmless with just a passing glance, its timeless brick architecture and sky blue awning shading the entrance and display windows. This historic site is much more than a bustling business and crown jewel of Colorado; it also houses local history and secrets that have seeped voraciously into each and every one of the bricks, leaking from the mortar in the form of unexplained paranormal activity.

All That Glitters Is Not Gold…

The town of Cripple Creek was put on the map by a cowboy named Bob Womack. He searched the slopes of the American Southwest for over fifteen years for gold, stepping foot over almost every single part of Pike’s Peak. In 1890 he finally discovered the precious metal in the ironically named Poverty Gulch, which later became the town of Cripple Creek.

Thousands of prospectors came to the region between 1890 and 1910, and soon Cripple Creek was known as the ‘World’s Greatest Gold Camp.’ More than 22,400,000 ounces of gold was painstakingly extracted from the more than 500 mines in the Victor and Cripple Creek regions. This gold amounted to a staggering 11.2 billion dollars in today’s dollars.

With such large sums of cash coming and going from Cripple Creek, it’s no surprise that there was unrest and even strikes among workers in the area. In the early 20th century, arguments began to arise about how the town’s prosperity should be shared. Mine owners tried to consolidate their power by taking control of local mills, while the Western Federation of Miners worked tirelessly to unionize those same mills. The push and pull of bourgeoisie and proletariat soon came to a head in 1903 over the issue of working hours. The Western Federation of Miners went on strike in the heat of August in Cripple Creek, sparing what would be a fifteen-month struggle with the owners of the mines. Other workers across the state were inspired and went on strike, demanding fewer hours and more secure working conditions. A decade before, Governor Davis Waite had called out the militia to support a strike in Cripple Creek, but this time he called out the Colorado National Guard on behalf of the owners. Many people were killed during this time as the military consistently overstepped its boundaries and authority. More than 200 union members were eventually deported from Teller County in what became one of Colorado’s bloodiest and most violent strikes. The battle resulted in a ban on organized labor or unions in the area. The strike marked a critical turn in the history of Cripple Creek’s mining efforts. It slashed gold production in half and scared off any future investors. Mines started filling with groundwater, and as quickly as the boom started, it began to cave in.

After its thrilling first years, the area’s gold production began to slow around 1900. The mountains seemed to have given all they could, and the early 1940’s gold production was down to less than one percent of what it once was. Seeing the decline first-hand, the town was almost entirely abandoned by 1990. With only 600 residents remaining and seeing its downfall approaching, the town legalized gambling and was revived. Many of the town’s historic buildings were refurbished into casinos. However, mining is not completely dead in Cripple Creek; in 1995, an open-pit mining operation was established at what was once the site of the Cresson Mine. Today, it produces 250,000 ounces of gold annually and is the largest mining operation in the continental United States.

A Gamble For A Better Future

Cripple Creek soon started to turn more from mining to mining history and tourism as it struggled to stay afloat and remain relevant and profitable. Mine tours began to be offered, and theaters and restaurants were also popping up all over the town. Tourism slowed when in 1989, repairs were being made to the main tunnel route into the town. Inspired by the example of Deadwood, South Dakota, Cripple Creek joined Central City and Blackhawk to push for an amendment to the state constitution that would allow them limited-stakes gambling. Fifty-seven of the state’s voters approved the amendment, and the first casinos in the area opened on October 1st, 1991. Ten days later, The Colorado Grande Casino opened its doors.

The Colorado Grande Casino and Its Spirits

The casino is built inside the historic Fairley Bros. & Lampman Building which was originally built in 1896 and has housed a drugstore, barbershop, and professional offices on its second floor. The structure consists of three levels and stood watching the town’s rise and fall and even witnessed the underbelly of the past, the bloody mining strikes.

The Colorado Grande Casino and Hotel is said to be among the most haunted locations in the United States today. A tall claim, but the building proves itself with countless stories of paranormal activity to this day. The most notable apparition seen in the hotel is the figure of an Irish woman known as ‘Maggie,’ and the hotel restaurant is actually named after her. She is said to be a beautiful young woman with red hair. Her mood and demeanor are always reported as positive, and she is mainly seen on the second and third floors of the building. Local legend says she tries her luck at the slot machines during the night with a male spirit by her side.

This is especially strange as there were no slot machines in the casino before 1991, which means that Maggie is an intelligent spirit, interacting with items that were not part of her life. She is also reported to sing in the hallways and has been spotted by security guards working the casino after-hours. She always disappears when anyone attempts to approach her, and it is believed that she may have been a member of the community of the past. She is upbeat and pleasant and shows herself as a human apparition as well as a glowing blue orb. She could have been the daughter of the building owner, a merchant, or an average citizen of the town. As for her male counterpart, it is unknown who he is, but many spectate that it could be a coworker or boyfriend of Maggie. Perhaps they died together, or he died around the same time that Maggie did and decided to stick around in the afterlife with her.

The Casino is also noted to be the home of a young female spirit named Lily. She appears as an apparition, and employees state that she loves purple balloons. If a different color balloon is left for Lily, it will pop mysteriously. However, if a purple one is left, it can be seen floating around as though it was being manipulated by a child, defying breezes and gravity.

These days, the Colorado Grande Casino and Hotel continues to bring lodging and entertainment to the Cripple Creek community. The hotel’s official website displays information on recent events, although there is little to be said about the possible paranormal happenings at the building. With this, visitors should be prepared, as there are countless reports of Maggie and Lily and security camera footage of a spectral woman playing the slot machines… which later went missing inexplicably from a safe in the building…